When the New York Wine Experience arrives each fall season, I try to go to the Grand Tasting event as it brings together some of the best names in wine from all over the world.  The price of the ticket is steep, but for the high quality of wine you have access to taste the experience is bar none for a consumer.  Trade shows happen all the time for the pros where they can taste many wines, but nothing like this at one event.
Under one roof one can taste all of the Bordeaux First Growths, the major Super Tuscans, the best Sauternes, many a cult level Cabernet Sauvignon from Napa Valley, many of the top Rioja from Spain, Barolo and Barbaresco from Italy, Chianti from Tuscany, some of the best Pinot Noir from all over the world, Riesling from Germany, as well as many, many other stellar wines from Argentina, Chile, South Africa, New Zealand and Australia.  In the 2.5 hours one person cannot get to all of the wines so a “careful study the day prior to map out a strategy is necessary.  A little discipline is needed to not ‘go back to the well” too many times – I was guilty of this at Chateau Latour’s 2003 second wine Les Forts de Latour this time around and Paul Hobbs’ 2004 Dr. Crane Cabernet.  You may even want to practice spitting a few days before, maybe at home in a big sink or in the shower.  If you don’t spit you won’t make it past 20 wines and still be able to know what you are tasting.  If the person pouring the wine is generous don’t feel like you have to drink it all, have a good taste or 2 and dump it in the spit bucket – it is there for just that purpose.  All professionals spit at trade tastings, in fact when you visit many places in France the Domaine or Chateau expect you to spit the sample you are poured.
I made it through quite a few wines with a break or two to catch my palate and my breath.  The tables are spread out over 2 floors in the Marriott Marquis ballroom in the middle of Time Square in New York.  I was able to crack 60+ wines, much lower than what I have done in the past but I wanted to talk to some of the people this time around, mostly my favorites like Jen and Paul at Paul Hobbs, the team at Latour, Vieux Chateau Certan and and new discoveries like Evening land Vineyards and Masi.  If I could attend the two nights and the all of the weekend events it would be a dream, but two nights of the grand tasting would be quite exceptional as well.  In all honesty I think the tasting should be longer, which would allow people to get the chance to talk to the person pouring the wine more and of course taste through more wines.  Usually the person pouring is the owner of the Chateau or winery you are actually drinking.  Sometimes it’s not but either way they know the wines well and can talk to you about how your favorite producer is or more about a new discovery.
My top ten wines from the Grand Tasting are as follows:
1)   Masseto 2001 (from Tenuta dell’Ornellaia)
Bolgheri, Tuscany, Italy

Here is a view into why these wines were my top ten and how they made an impression on me to think so.  Its deep in Bordeaux, but that was what I had aimed to taste.  I am sure Vega Sicilia, Gaja, Saxum, and Salon could have made the list but there was only so much time.  I have had those wines at previous tastings or at home recently so I saw it fit to try more wines that I have not had recently.

The 2001 Masseto was an eye opener.  I knew this was a top wine when I approached the table to taste the wine, but had no clue as to the fact is was 100% Merlot, rated 100 points, and retails for north of $1,000.  I found out these details the next morning.  A fellow taster mentioned $400-600 and I was blown away then!  Does this make it great, no, certainly not, but it was a fantastic wine showing depth, purity and length in perfect proportion and detail.  I do not have enough experience with Super Tuscan wines to rate it properly but I would say it easily is 96+.  My friends this is no ordinary Super Tuscan.  My first impression from the aromas was that it was more like a mature Bordeaux than a wine from Bolgheri on the Tuscan coast.

The 2006 Chateau Mouton Rothschild defines Pauillac.  A deep sense of terroir shines through in layers as this wine mesmerizes the senses.  A heady, and typical Mouton aroma leads the taster into a deep palate of black currants, licorice, and cassis that floats the taster back to the nose and then back to another sip.  In time this will be a superb example of Mouton.  One may not have tasted but more sensed the greatness of this wine on this night.  It was my favorite of the Bordeaux on the night, just eclipsing the Les Forts De Latour.  The Mouton is still a baby, it is young, tight and aggressive and needs many, many more years to show its proper potential.   2006 was not so bad a vintage, the problem is that it came right after the exceptional 2005 vintage.  I tended to buy in 2006, but in limited quantities on futures.  I tend to look back now and buy 2006 in bottle and am pretty pleased with what I have had so far.

The Paul Hobbs 2008 Dr. Crane Cabernet Sauvignon was a luxuriously deep and complex wine.  I had to go through it 3 times, but it really needs more time to open up properly.  Waves of black and red fruits, dark chocolate, and licorice wafted from the wine and converged on the palate.  Sweet and ripe tannins framed the finish that sailed on forever echoing the currants and cassis.  A deep garnet color with vibrant red edges from the wine’s youth tells me this baby is ready for the long haul.  I have had a few 2001 of late, the Hyde Cabernet in particular and the wine was in perfect shape.  Paul has a magic touch with many grapes, but Cabernet is where he has the Midas touch.

I have to say I was a little disappointed that Chateau Latour was not being poured.  Only their second wine was being poured instead.  However, I am happy to write that the 2003 Les Forts De Latour was drinking superbly this evening.  Overall I do not love the 2003 vintage in Bordeaux.  It was hot, the vines were over stressed and many Chateau did not have the proper terroir or experience to know how to get through such a hot year.  The Les Forts De Latour is ripe but well balanced as the ripe tannins are big and pair well with the ripe fruit and good levels of acidity. All three of those lead to a long finish of fruit, tannin and freshness.  This was the second best Bordeaux of the night for me in that it was complete, and fully expressive.  Even at this young an age, it was utterly delicious, sumptuous even.  It had length, a wonderfully captivating aroma and a beautiful robe of deep red and garnet flecked colors.  It was as if Frederic Engerer knew that this would be a good choice for this occasion.  Whatever the logic, it was a pretty good one, albeit Chateau Latour would have been nicer.

The 2007 Chateau Climens was the best sticky on the night, even better than the venerable 2008 Chateau d’Yquem which leaned more to the exotic side as my second favorite Sauternes wine of the night.  Pure aromatics of citrus, petrol, minerality, honey and stone fruit rose from the glass and coated the palate in a rich, yet lively feel, racy even for the Climens.

I have yet to receive my shipment of 2008 Chateau Ducru Beaucaillou futures, but this top wine of the night brought me great satisfaction in the depth and complexity found in this wine.  A nose of currants, spicy plum, cedar, and toasted coffee bean lead through to the palate which was full bodied, yet silky with plenty of fruit and depth through the palate expression.  Terroir rings with minerality that leads to a long finish of fruit, fine but sturdy tannins and a wealth if fresh acidity. 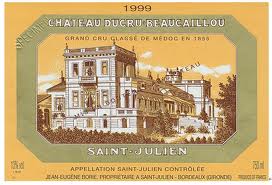 The 2004 Chateau Montrose blew me away.  I am rarely impressed by any 2004 Bordeaux, but this wine was in great form this evening.  Showing true to form with roasted and toasty notes of coffee, currants, blackberry, an earthy fall leaves note, as well as some saddle leather aromas.  The palate was round, delivering from the attack on down to the finish which delivered a stoic and tannic finish typical of young St. Estephe wines.   The beauty here was the fruit and other notes that accompanied that structure.  This wine should age nicely over the next 20 years.  At about $60 it will probably also be the last time you see a Montrose for anything close to that price as the new vintages are running close to $200 or more. 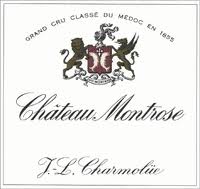 2005 Chateau Cheval Blanc is a legend in the making.  The 2005 Cheval is way too young to drink and enjoy at its finest, but is quite a generous offering from the Lurton clan that runs thus legendary property.  This was a nice peak at how a young wine of such pedigree is in its youth, way before I would ever open to see just how it tastes at this stage.  Super tight in nose and flavor the 2005 Cheval had firm but ripe tannins, silky, even lush fruit peaks through that wall of youthful structure.  This will be an amazing wine in 10 years, but even better in probably 20-25.

2001 Ornellaia was rich, yet refined, structured yet seductively inviting.  The wine was at once ripe, deep, and dark and at the same time structured, noble and classy in that it could strut well in its youth but also show the structure and concentration to know this will age gracefully.  A super Tuscan of the higher order, this is the cousin to the Masseto that was my number one wine of the night.  Lisa and I had a bottle of this in Florence on our first night with a traditional bistecca alla Fiorentina, I believe it was a 1997 and was exquisite.

Evening Land Vineyards was pouring 2 wines, a Pinot Noir and a Chardonnay.  ELV is a unique producer of Burgundy wines from a few places in the world:  Burgundy, Oregon and California.  Mark Tarlov is the owner and was pouring his wines that night.  We talked about the difference they are trying to make in the style of wine they are crafting in California and Oregon.  Mark and his winemaking team have chosen cooler sites such as the Sonoma Coast and the Willamette Valley to showcase the subtlety  that Pinot Noir and Chardonnay can have outside of Burgundy and at the same time maintain acidity and balance.  Both wines were new world in flavor, but had exceptional freshness on the finish because of the acidity maintained in the wines.  Red fruits instead of black came from the pinot and citrus, pear, and a slate like minerality rose from the Chardonnay.  I had actually walked down about four table and the acidity in the Chardonnay came into full force.  I had to walk back and tell Mark exactly that and that his wines were superb.

Many, many other wines were exceptional.  In fact they call it the Critic’s Choice as each wine was rated at least 90 points out of the 100 point scale that Wine Spectator uses to rate the wines they taste.  If you ever wanted to try some of the best wines in the world in one place this is it.